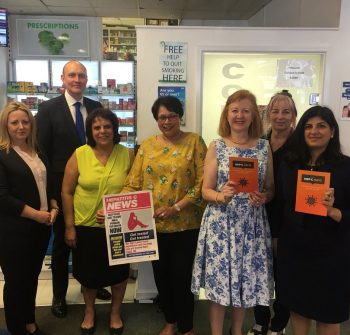 The European Monitoring Centre for Drugs and Drug Addiction (EMCDDA) chose to feature phase one of the LJWG’s community pharmacy testing pilot in its resource, published on the 26th July 2019.

The EMCDDA is an EU agency existing to provide the EU’s Member States with a factual overview of European drug problems and a solid evidence base to support the drugs debate.

In advance of World Hepatitis Day, the organisation published ‘Hepatitis C: new models of care for drugs services’. This report aims to highlight the importance of targeting people who inject drugs as a key population for the elimination of hepatitis C in Europe.

Innovative practice is the focus of the report, with key insights from 11 case studies (three of which are from the UK) explored in detail. These include the results, impact, sustainability, and transferability of each practice to guide the implementation of these new models of care in other countries and settings.

The LJWG’s community pharmacy testing pilot (phase one) has been included in these case studies as a model of best practice for increasing hepatitis C testing and care for people who inject drugs.

The project ran from October 2017 until March 2018. Its purpose was to test people who were not currently engaging in community drug treatment services but who were actively injecting drugs and therefore at risk of hepatitis C transmission. Comprehensive testing and referral routes do not exist for this group; the pilot aimed to use the potential contact they might have had with community pharmacies while accessing needle and syringe programmes (NSPs) to get them tested and treated for hepatitis C.

216 people were tested for hepatitis C in eight pharmacies in London, of whom 53 per cent were found to have hepatitis C antibodies. Those identified as positive were provided with literature on hepatitis C treatment and referred to a local service for further RNA testing. Those who then tested negative were advised to be tested again in three to six months and provided with harm reduction information. Those who tested positive for hepatitis C RNA were referred to treatment and offered a peer worker to assist them in accessing secondary services.

We are glad that the EMCDDA has recognised the success of the pilot in demonstrating that providing opportunistic hepatitis C tests within NSP community pharmacies can be an effective way of engaging people who inject drugs with high risks of transmission in testing and onward referral for treatment.

The second phase of the pilot, launched in July 2018, took the pilot to the next stage and supported pharmacists to deliver more accurate blood tests to assess whether or not the patient is chronically injected or has already cleared the virus. The report on findings from phase two of the project will be published shortly.