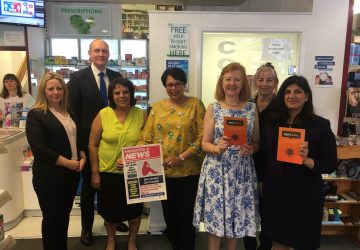 The EMCDDA is an EU agency existing to provide the EU’s Member States with a factual overview of European drug problems and a solid evidence base to support the drugs debate. In advance of World Hepatitis Day, the organisation published ‘Hepatitis C: new models of care for drugs services’. This report aims to highlight the...

Hepatitis C is a blood-borne virus, which primarily affects the liver. People can live with hepatitis C for decades without symptoms but untreated cases can cause fatal cirrhosis and liver cancer. Public Health England estimate there are 14,200 people living with hepatitis C in London and 113,000 people with the virus in England, around half...

A call to action: Overcoming barriers to allow treatment in community pharmacies (July 2019)

Fully embracing the strategic priorities and ambitions to eliminate hepatitis C as a public health threat by 2025, the London Joint Working Group have been exploring the options around the introduction of a community pharmacy hepatitis C treatment service. Despite full local system support for the initiative and examples of similar services being introduced successfully...

Following the success of the LJWG’s hepatitis C pharmacy testing pilot, the group has joined forces with the All-Party Parliamentary Group on Liver Health to urge the government to allow pharmacies to dispense hepatitis C treatments. Chemist + Druggist magazine has reported on the issue, highlighting the LJWG pilot’s findings that 84% of people who...

Working closely with 8 pharmacies across London, our hepatitis C pharmacy testing project offered point-of-care tests to people who use needle exchange services, engaging with and meeting the unmet needs of this vulnerable and high-risk group. The project developed a working model of testing and referral into treatment that is now being rolled out in...

The motion stated:  “This Assembly believes that hepatitis C is a serious public health and health inequalities issue in London and urges the London Mayor, in his role as Chair of the London Health Board, to lead efforts to raise awareness about the condition and new curative treatments available. This Assembly also calls on the...

More must be done to coordinate drugs services, prisons, pharmacies, GP practices and secondary care around one strategic vision if London is to become the first global city to eliminate hepatitis C, the annual conference of the London Joint Working Group on Substance Use and Hepatitis C (LJWG) heard this week. The conference brought together...

On 22 November 2018 the LJWG was awarded ‘Highly Commended’ for ‘Excellence in Collaboration and Partnerships’ at the prestigious PMEA awards for phase 1 of our HCV pharmacy testing pilot. The awards night was hosted by TV presenter Natasha Kaplinsky.  The judges commented saying: “The work by LJWG on Substance Use and Hepatitis C, MSD...

In the first plenary session after the summer recess, Susan Hall AM raised this issue with the London Mayor, explaining: “Hepatitis C is a significant issue which impacts on the lives of many Londoners and disproportionately affects some of our most vulnerable and excluded citizens… We could be the first global city to rid ourselves...