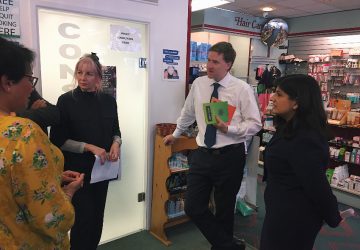 Public Health Minister Steve Brine MP gives support to pioneering project offering hepatitis C testing in pharmacies that offer needle exchange. Pilot offered tests to those at risk of exposure; half of those tested (53%) had hepatitis C antibodies and 78% of those who engaged with specialist services had hepatitis C viral particles detectable in...

Pharmacy hepatitis C testing pilot – results due in May

Hepatitis C is a serious health inequalities and public health issue in London. There are an estimated 41,500 people living with hepatitis C in London, many of whom are some of the most vulnerable and the most socially excluded people in our society. Over half of people who attend hospital for hepatitis C are from...

Parliamentary Under-Secretary of State for Public Health and Primary Care, Steve Brine MP, will address delegates about this critical public health issue at 9.35am and the full agenda for the day is here. There are an estimated 41,500 people living with hepatitis C in London, many of whom are some of the most vulnerable and...

How a Lambeth project integrated specialist services based on the LJWG consensus model to engage service users and provide equity of access to care.

How a Lambeth project integrated specialist services based on the LJWG consensus model to engage service users and provide equity of access to care. Kath Oakes and Dee Cunniffe describe the project in a the latest HCV Action video case study. View the full article here.

We’ve updated our 2011 London Consensus to make it relevant to the NHS in London today, in the era of new treatments and opportunities. PRACTICAL STEPS TO ELIMINATING HEPATITIS C: A CONSENSUS FOR LONDON reinforces the need for urgent leadership to improve hepatitis C testing and treatment services in London for people with a history...

LJWG part of Vision for Change with Hep C Coalition

LJWG response to NHS England abandoning Liver Strategy Public Health Minister Jane Ellison has announced that NHS England has abandoned plans to publish a National Liver Disease Outcomes Strategy.1 The London Joint Working Group on Substance Misuse and Hepatitis C (LJWG) believes that by failing to keep its promise to publish a Liver Strategy, the government has failed the...

The Mayor of London, City of London and The Hepatitis C Trust have issued a call to action to London’s councillors to address the growing problem of hepatitis C in the capital. The ‘Reducing health inequalities in London by addressing hepatitis C’ briefing encourages local authorities to promote testing, expand training and monitor improvements. The...

NHS could save £200 million by treating hepatitis C in London

A public health report shows that treating just 10% of people with hepatitis C could save £200 million in London alone.  The Public Health Report on Commissioning of Hepatitis C Services in London for People who Inject Drugs reports that currently less than 4 % of people with the hepatitis C virus in England are...